The ADS is a coupled system of a subcritical reactor and an external proton accelerator. ADS may utilize fuels with large fractions of transuranic elements (TRUs) because of ADS large safety margins related to sub-criticality. Therefore ADS was proposed for transmutation.

The proton beam enters the center of the reactor core through a vacuum tube and hits the lead target where neutrons are emitted.

The pool type reactor is cooled by liquid lead or lead-bismuth. In the PDS-XADS design (https://cordis.europa.eu/project/rcn/58635_en.html) a bubble lift pump supports natural convection and transports thermal energy to the heat exchangers. The following schematic illustrates the mechanism of an accelerator driven system. 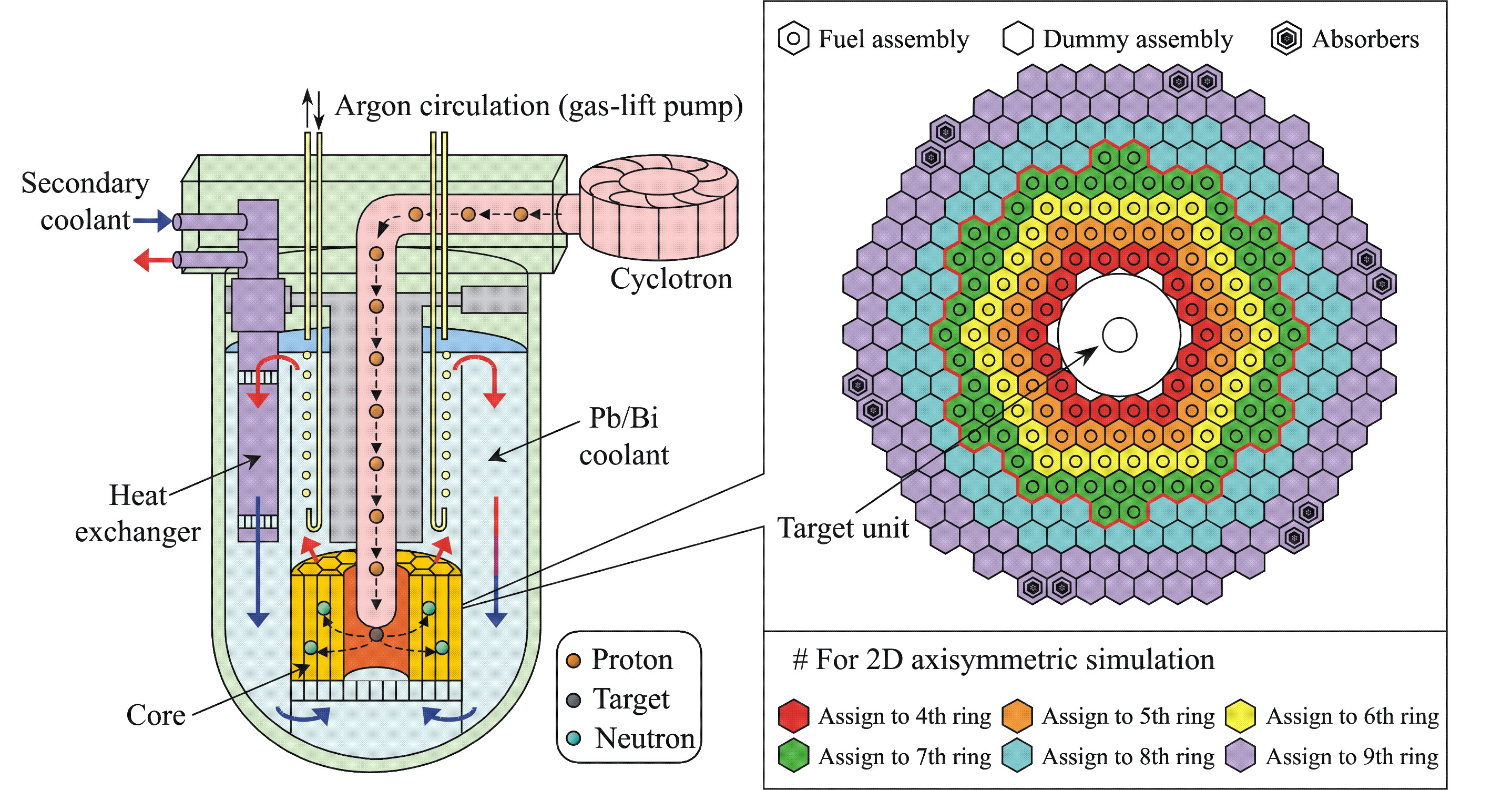 Compared to critical reactors, the subcritical ADS has a larger safety margin for reactivity insertion. Nevertheless safety analyses have to take into account many new and innovative features of such systems:

The subcriticality is an essential advantage for ADS, as mentioned before. There is an additional safety effect: in the case of a loss of power (station black-out) the accelerator beam providing the external neutron source is shut off automatically and the chain reaction in the reactor stops.

Due to the external source, a new class of transients /accidents related to the accelerator side have to be analysed. These transients are due to possible change of the source strength.

Other transients, related to the reactor side, are possible due to the same initiators as in critical reactors. They result in smaller power variations as follows from analyses of transients such as loss of flow (ULOF), transient over power (UTOP), blockage accident (BA), etc.

Recently we were involved in CDT, SEARCH and MAXSIMA projects in 7th framework of EU programme and performed safety analyses for MYRRHA with SIMMER code. The principal partner is SCK-CEN. For details of the projects and the MYRRHA reactor we refer readers to following links:

Besides we performed typical unprotected over power for the critical mode of MYRRHA, we developed the so-called fine mesh approach for both SIMMER-III (2-D) and SIMMER-IV (3-D), so that we could solve reactor transient problems with SIMMER in a resolution of sub-channel scale.

Below there is an example of simulation of a central fuel assembly blockage accident, i.e. active core entrance blockage with all sub-channels blocked [Chen et al. 2017]. The figure shows the development of the FA damage with material distributions. At t = 9 s after the blockage (Time = 69 s), the upper part of central pins starts to melt and the fuel becomes particles locally. At t = 33 s after the blockage (Time = 93 s), the whole FA pins are molten and the fuel becomes ‘‘particles” totally in this FA. 2 s later, i.e. at t = 35 s after the blockage the inter-wrapper can-wall in the upper part of the active core is molten. The fuel particles and molten steel can go through the can-wall breakup into the inter-wrapper gap, where the flow is small but normal. Then the fuel particles will escape from the core to the upper plenum. Consequently the reactivity and power will decrease abruptly, as can be seen in the next associated figure.

Current analyses show that there might exist a safety problem for a transmuter ADS with pure MA fuel (Am, Cm) and that power transients could occur under unfavorable conditions. The thorium core in contrary behaves benign even in the case of core melting and disruption.

Proposals are currently made and investigations are performed to assure the safety of an ADS with dedicated fuel. Inherent and passive safety measures should be implemented and strengthend to prevent severe transients and/or mitigate consequences. To cope with the possibility of accidents in an ADS e.g. fertile material could be introduced. Also the ideas concerning passive beam stoppers and proposals investigated in the critical cores related to controlled material relocation (CMR) are investigated if they can be implemented into the ADS safety strategy.

Within the 5th Framework Program of the European Union the so-called Preliminary Design Studies of an Experimental Accelerator-Driven System (PDS-XADS) are performed by Ansaldo. The configuration of this ADS and its core arrangement are shown in the following figure. For the safety investigations, the SIMMER-III code has been adapted to the needs of describing a sub-critical core with a strong external neutron source, a treatment of Pb/Bi flow and requirements of other ADS specifics.