The C4P-TRAIN code and data system is mainly to generate and validate nuclear data libraries for the SIMMER (link) code. It has been also employed to provide neutron cross-sections for the KORIGEN (link) and COUPLE (link) codes.  The system is also applied for different types of reactor physics calculations in combination with other codes, the most recent application being to compute He production in Am-bearing fuels for simulation of irradiation experiments in a NEA project (link). The system includes 2 parts: (1) C4P for management of nuclear data libraries and (2) TRAIN for performing reactor physics calculations with these data libraries; that helps to validate the libraries.

The 40-group and 72-group SIMMER libraries are produced from JEFF 3.1 evaluated nuclear data files in several steps and include more recent data for most of isotopes. During the first step, C4P 560-group “master” libraries are obtained evaluated nuclear data files by using the NJOY and GRUCON codes.  Then 560-group files for natural elements, such as Fe, are produced by C4P from 560-group data for particular isotopes, such as Fe-56. Then the 40-group cross-section library (for thermal reactors) and 72-group one (for fast reactors) are produced from 560-group data, the group structures and weighting (neutron) spectra being chosen at KIT for taking into account the application areas of these libraries.

The multi-step scheme is used in order to

The figure below shows deviations between the criticality values computed with 172-group, 560-group and 1968-group libraries from reference (with continuous energy data) results and statistical uncertainties of reference results for a number of selected compositions related to different reactor types (see more details in Ref. 1). One may see that deviations between the criticality values obtained with the 560-group and continuous energy data are below about 200 pcm (0.2%), that is a small number. The 172-group structure (halved deviations are shown in the Figure below) is less accurate than the 560-group one, the 1968 one is similarly accurate for the considered cases. The 172-group and 1968-group structures are employed in ERANOS and considered as boundary cases while establishing the C4P the master library. 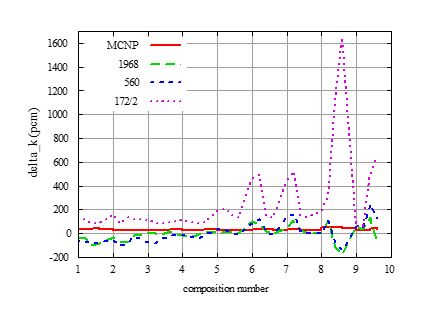 Figure: Deviations of 172-, 560- and 1968-group reactivity values from those of
MCNP, MCNP kinf uncertainties