In 1985, a development program was started to address problems with existing multiphase codes for highly transient flows of at least three components in at least three velocity fields. The program was supported by the US-NRC, PNC Japan, CEA France, JRC Ispra Italy, and the Forschungszentrum Karlsruhe (FZK). The code AFDM (Advanced Fluid Dynamics Model, (Bohl, 1992)) became the test bed of the future whole core accident codes SIMMER-III (Kondo, 1994) and SIMMER-IV.
The code allows to track one component in the solid, liquid, and vapor state, a second component in the liquid and vapor state, and a third component in the vapor state. The numerical solution method with its predictor-corrector method allows to add user-defined explicit models. The solution method reduces significantly computational expenditure. Space and time discretization is of second order. The code was developed in a Unicos environment where it was highly vectorized. It is presently running on HP and SGI workstations and on Linux PC.
A unique feature of time and space dependent interfacial areas was incorporated into the code to meet the demand for more accurate description in highly transient flow of heat, mass, and momentum transfer between two liquids and a gas vapor mixture. The multitude of flow conditions required also to define the continuous phase based on prevailing conditions in each computational cell. The picture gives an overview over the range of conditions. 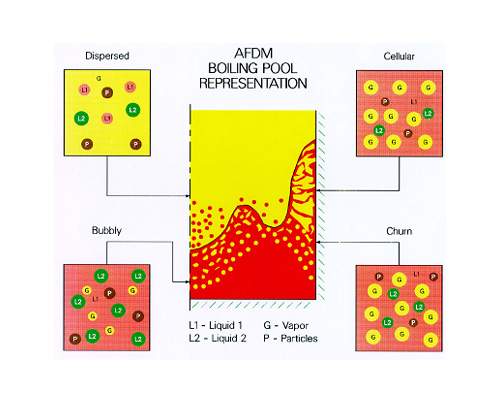 A number of explicit models has been added in the course of solving pending problems. These models are uniquely used for the given study, and the software surrounding allows an easy introduction into and removal from the code. Among others, these models describe deforming or moving structures, metal oxidization, hydrogen combustion, entrainment and entrapment at film surfaces, and crust formation at walls.
The following tables show the history of the development of the SIMMER family of codes, and major studies performed by AFDM.

The following figure shows a feasibility study using AFDM for calculating the movement of two immiscible liquids, blue and red, in the lower head of a cylinder which reverse their stratified configuration due to an externally driven density change. This could be the result of any chemical reaction the model of which would be added to the code. 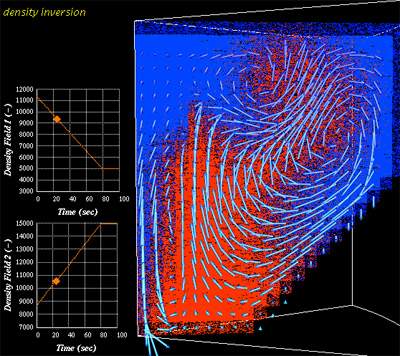